This morning I wrote a short article with Nic Suzor on the recent case in the United States, where Robin Thicke and Pharrell Williams were sued for copyright infringement over Blurred Lines.  I’ve reproduced the article below (it’s openly licensed – so you’re free to share!) and you can also access it on The Conversation website.

Blurred Lines may be the biggest music copyright case of 2015

Marvin Gaye’s family has won damages of more than US$7.3 million in a case involving Robin Thicke and Pharrell Williams. EPA/Paul Buck

The year is still young, but this week a judgement was handed down in what may well be the biggest music case of 2015.

Marvin Gaye’s children have won a copyright law suit against Robin Thicke (no stranger to controversy) and Pharrell Williams for the song Blurred Lines. The 2013 hit was found to have infringed Gaye’s musical copyright in Got To Give It Up. A jury in the US awarded damages of nearly US$7.4 million – more than half of the song’s US$16.6 million takings to date.

What exactly was copied?

Strangely, this case wasn’t about comparing the two recordings. It was actually much more confusing than that. Listening to the recordings, the similarities are clear:

Listen for yourself – how similar are the two songs?

But this case wasn’t about copying of the recorded version, but the sheet music.

Importantly, Blurred Lines doesn’t copy the lyrics or the lead melody. Williams admits it has the same “feel”, but claims he was just “channeling that feeling, that late-70s feeling”.

Importantly, you can’t copyright the feel of a song.

The Judge in this case ordered a comparison of only the copyrightable parts of Gaye’s song – and when you listen to that, the two songs start to sound very different:

Then the court also heard a mash-up of Gaye’s music with Williams’s and Thicke’s lyrics on top:

This mashup seems to suggest that the lyrics fit quite well over Gaye’s song, but critics note that this happens quite often – as this clip from Australian comedy group the Axis of Awesome shows. The website Sounds Just Like has lots more examples if you have a few hours to kill.

Thicke has admitted that he was influenced by Gaye’s song and wanted to make something with the same feel; but many people think that shouldn’t be enough to infringe copyright.

We’ve seen similar cases in recent years – in 2014, Led Zeppelin faced allegations that the iconic guitar riff in Stairway to Heaven was appropriated from a song by rock band, Spirit. In 2010, Australian band Men at Work were found to have infringed copyright in their hit Down Under, because the flute riff was copied from the 1934 folk song, Kookaburra Sits in the Old Gum Tree.

In some ways, it’s easier to feel angry about these cases – they’re iconic songs that have become part of our cultural landscape; they only took small parts of the original songs; and the similarities were not discovered – or at least litigated – for many years: after 43 years in Led Zeppelin’s case and more than 20 years for Men at Work.

Protecting creativity, or credit-where-credit’s due?

This case highlights a common confusion in what copyright law is about. Contrary to what we often think, copyright isn’t about “credit where credit’s due”. It’s about encouraging people to make and produce new works.

If copyright is about incentives for creativity, this decision makes no sense. No amount of money now will encourage Marvin Gaye to make more music. What this case does do, though, is discourage future artists from revealing their influences and reworking our culture.

Pharrell Williams performs in The Netherlands in 2014. EPA/Paul Bergen

Blurred Lines sure sounds like Got to Give It Up, but it doesn’t harm the market for the original. Nobody is going to be fooled into settling for Robin Thicke when they’re looking for Marvin Gaye.

Somewhere along the line, copyright has been twisted from its original purpose. Copyright only used to last 14 years. It now lasts for a whole 70 years after the original author dies.

This is well after the commercial life of most works. Got to Give It Up was at its commercial peak around 1977, when it topped the US Billboard Hot 100 charts. The copyright in the song, though, will last another 40 years.

The extraordinary length of copyright means that a huge amount of the material that influences us to create something new is locked away. When copyright does this, it stops being an incentive, and it becomes a tax on creativity.

The two songs are clearly similar – but they are also entirely different creative works. And that should count for something.

Copyright law focuses only on similarities when assessing infringement. This ignores the way that all creativity builds upon the past.

Sometimes, copyright law is able to distinguish between copying that takes the “idea” or “feel” of something and copying that is actually harmful. Other times, that distinction is more difficult. Thicke and Williams, by some accounts, have been unlucky – caught in the cogs of a legal regime that values earlier creativity over newer creativity, and where protection is too long. 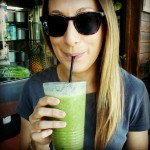 Hey there, I’m Kylie. I provide bloggers (like you) with information to help you navigate the legal issues around blogging – so you can get on with the important job of creating!
Read more here

Where to find free and legal content online
There is no copyright in ideas
Copyright ownership and collaboration
Stop, collaborate + listen
Why I write